Always good to be reminded yet again

ONE. Give people more than they expect and do it cheerfully.
TWO. Marry a man/woman you love to talk to. As you get older, their conversational skills will be as important as any other.
THREE. Don't believe all you hear, spend all you have or sleep all you want.
FOUR. When you say, 'I love you,' mean it.
FIVE. When you say, 'I'm sorry,' look the person in the eye.
SIX. Be engaged at least six months before you get married.
SEVEN. Believe in love at first sight.
EIGHT. Never laugh at anyone's dreams. People who don't have dreams don't have much.
NINE. Love deeply and passionately. You might get hurt but it's the only way to live life completely.
TEN. In disagreements, fight fairly. No name calling.
ELEVEN.  Don't judge people by their relatives.
TWELVE. Talk slowly but think quickly.
THIRTEEN. When someone asks you a question you don't want to answer, smile and ask, 'Why do you want to know?'
FOURTEEN. Remember that great love and great achievements involve great risk.
FIFTEEN. Say 'bless you' when you hear someone sneeze.
SIXTEEN. When you lose, don't lose the lesson.
SEVENTEEN. Remember the three R's: Respect for self; Respect for others; and Responsibility for all your actions.
EIGHTEEN. Don't let a little dispute injure a great friendship.
NINETEEN. When you realize you've made a mistake, take immediate steps to correct it.
TWENTY. Smile when picking up the phone. The caller will hear it in your voice.
TWENTY- ONE. Spend some time alone.


I evaluated the entire situation after a long chill out session at Starbucks with Cindy.
Love this girl to bits. She got me some goodies from Korea! 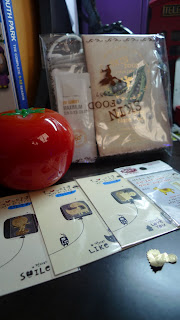 She is just not so worth it as a 'regular' friend after all:


1) she doesnt care if i get enough rest. a good friend will tell me to rest up before meeting. i was jet lag to the max and i had work the next day. what did you do for me? you hounded me like a crazy girl.
2) she is totally not sensitive to my needs
3) she crossed the line when she asked other people for my address
4) money can test a lot of things (just like how it tested me & Liyu 3 years back)
5) you're so fake
6) i cant communicate with people who dont understand English. My last sms to you was NOT to come. and there you go insisting i should have called you. calling & smsing is the same. if i called u and told you not to come, the result would still be the same. so why shld i waste money calling you when i have made it clear over sms? why cant you just accept it when i told you not to come and to give me this weekend to rest before meeting up? you gave me tons of missed calls. gave J the same amount. any idea how psychotic you behaved? You said you didnt mean it. I'm sure you did.
7) you're in denial
8) you've an issue with money
9) you acted like a crazy girl hounding me & my friends, flooding my inbox with nothing but your smses
10) total drama queen. you over-reacted.
11) not understanding, keep insisting on collecting it even after my 25hours long haul
12) i have every right to judge you for this matter & you know you're the one at fault
13) you don't appreciate my help at all. i dont sense appreciation & there's no prove of it. period.
14) you're so fickle minded. none of these would have happened if you've passed me GBP2100 before i left
15) you doubted me & i hate this. HATE is the word.


You know it babe, you just dont care about me enough as a friend. you're making use of me. You can argue your case but your ugly character is already the obvious answer to everything. After all, they say actions speak louder than words.


I admit i got annoyed because you implied you didn't want to topup. You know i will out-smart you. If i've allowed you to collect it at the airport/my home, you wouldnt've paid the topup. Only when i said i was going to sell it, then you offered to pay the extra for exchange rate difference and phone calls involved. My family told me to refund you and sell others who are more willing to pay for it. Fuss free. Isn't it absolutely natural to cover all costs involved? Why should i topup for you when you're asking a favor from me? Who are you.


Its so embarrassing you can walk into Prada & HulaCo to ask for discounts. Or make a loud & silly remark at Tiffany's.


There's a whole lot of other small silly matters but i shall bury them all after this entry.


It's over. You've apologized but we both know things will never be the same again. Some people, considering their age, should start evaluating their current lifestyle and realize it's time to transit into the next stage of maturity. I'm reminding myself the same too.

Even when Dine comes over to collect her spree items, which are worth much lesser than your Chanel jumbo for sure, she buys me a cake as a sign of appreciation. Sucha darling i tell you. She demonstrated point #1. Refer to the above.
Mind you, your bag is from London, not Orchard Road. I helped you to save SGD1400 already. What else do you want? Don't calculate with me. I wasnt joking about the topup. Why would i joke about it. Some people just want to pay the other party the exact amount for the item. I should charge a concierge fee to evil people next time. How would i have known right. I thought she was a nice friend.
I am not afraid even if you happen to stumble across this entry.
My conscious is clear.

Thank you to woman, faith, melly, angeline & J for listening to me prior to this entry (: